Was King James A Catholic?
First we have to define what a “Catholic” is.
Our biggest problem is still mixed worship, blending together foreign ideas with the pure Truth. Constantine set up the policies of Christianity at the Council of Nicea in 325 CE/AD.
He had already established his Sunday Law for the empire in 321 CE/AD, specifically to honor the Sun.
With the help of Athanasius, the Council of Nicea defined Catholicism as those having a belief in “one god in three persons.”
Easter (Ostara to witches) was officially recognized and universalized.
Constantine ordered that Catholicism would have nothing in common with the “hostile rabble” of the Yahudim. Passover and other appointed-times were prohibited. Later, the weekly Sabbath was outlawed.
The 28 times the word PASCHA is found in the Natsarim Writings shows a consistent meaning each time, just as any other word.
In the book of Acts, Luke refers to the feast of Unleavened Bread. In the Greek we see the word PASCHA used to include the entire period of Matsah.
The idea of Easter did not play any part until Constantine’s time centuries later. Luke would not have used one of Yahuah’s appointment times to refer to a heathen rite like Easter, and yet in the KJV we see the word Easter at Acts 12:4.The KJV is based on the Latin Vulgate, the Roman Catholic “inspired” text used by the Anglican Catholics who worked on the Authorized Version. At Acts 12:4 the Latin Vulgate has the word PASCHA, yet the tradition of Easter was so ingrained in the Anglican Catholic translators, they opted to alter the meaning of the word.
Yahusha is our Passover Lamb (or Paschal Lamb), not our Easter Lamb.
They also followed King James’ orders to include the word “church” (for ekklesia, congregation).
James was baptized as a baby in a Catholic ceremony, and never observed Shabath. He and his translators did not call on the Name, nor guard the Everlasting Covenant.
Christians built tall walls around the Yahudim communities to keep their followers from seeing what Commandment-keeping looked like. These were called ghettoes.
Those who do not call on the Name (Ps. 79:6), and guard the Shabath (Is. 56:6), are not Yahuah’s people.
The Everlasting Sign Between Yahuah And His People: The SabbathThis is proof that Christians are not Yahuah’s people:

A Catholic council proclaimed Christians MUST WORK on the day Yahuah ordered NO WORK:

“Christians must not judaize by resting on the Sabbath, but must work on that day, rather honoring the Lord’s Day; and, if they can, resting then as Christians. But if any shall be found to be judaizers, let them be anathema from Christ.”

We have to choose whether we will obey Constantine, or “live by every Word that proceeds from the mouth of Yahuah.” Constantine would not have allowed the latter.

The REALITY Of The Sabbath:
https://www.youtube.com/watch?v=2MkP-klV9Bk&list=PLBSS-R8OmhQKqdrh1jRA2YRgq3SLhu78y 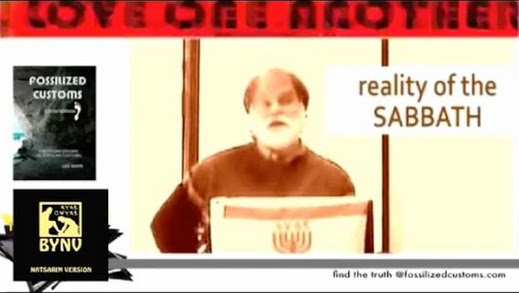